We canceled 8 of the 9 workshops we scheduled for July 26-30, but kept the best one alive. Adrianna Hicks, star of SIX, will still lead a session on Wednesday, July 28, at 3pm. Register now.

What can you learn from SIX star Adrianna Hicks? 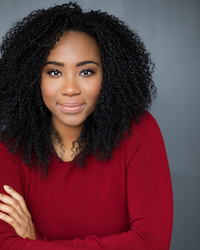 ​SIX, the Musical star Adrianna Hicks will lead a workshop for New Mexico high school drama students Wednesday, July 28, 3pm. Adrianna plays Catherine of Aragon in the Broadway musical. Her Broadway debut was in the revival of The Color Purple, working alongside Jennifer Hudson and Cynthia Erivo. She later went out on tour with the national company, playing the lead in theaters across the country. A Texas native with a B.F.A degree in Musical Theatre from The University of Oklahoma’s Weitzenhoffer School of Musical Theatre, she has also worked with Jerry Mitchell, Michael Bublé, and Heather Headley.
​
​She will talk about what she learned in college, what she gained from the stars she's worked with, and what she discovered by rehearsing for and playing leads in Broadway musicals.

We also have 8 other workshops this year offered over 5 days, July 26-30. Register for one, all nine, or any number in between.

Our workshops are designed to help you tell the story of any musical or play through acting, movement, and voice. Any one of the workshops should give you greater confidence in your abilities for auditions, rehearsals, and performances. Taking all of them can give you a tremendous boost to your skills. Most sessions include exercises that you will do in the class, and that you can take away for practice later.

Our session with Ms. Hicks will be online to make it accessible to the most students anywhere in New Mexico. The workshop will be 60-75 minutes long and are restricted to high school students and teachers only. The workshop is pay-what-you-can and payment is entirely optional.

To register, please fill out our registration form.
​
We look forward to working with you!